Fools will oppose with senseless prattle,

binding the truth with chains that rattle.

Though the horse is prepared for the day of battle,

cruelly intend to have their own way.

Tides can turn as we watch and pray

Situation’s can often look rather bleak,

God’s face we must not fail to seek.

We cannot succeed in our strength alone.

We need help to flow from heaven’s throne.

And in its arrival, this truth fully known

Victory is from the Lord!

“A horse is prepared for the day of battle, but victory comes from the Lord.” Proverbs 21:31

I’ve no right to say

“Why hast thou made me thus?”

It’s not open for us to discuss.

On your spinning wheel

teach me to stay.

Let  your hands shape me in the right direction,

that works out imperfection.

and put on display.

just by You to be used

in the exact manner

that You wisely choose.

If you see part of me

to you I make this earnest appeal

although it may hurt, put me back on the wheel.

Dear Lord, have Your way.

In your mercy and patience

cease not to work on me

till I’m fit for a God filled eternity.

“Then I went down to the potter’s house, and, behold, he wrought a work on the wheels. And the vessel that he made of clay was marred in the hand of the potter: so he made it again another vessel, as seemed good to the potter to make it.” Jeremiah 18:3,4

“Nay but, O man, who art thou that repliest against God? Shall the thing formed say to him that formed it, Why hast thou made me thus? Hath not the potter power over the clay, of the same lump to make one vessel unto honour, and another unto dishonour?” Romans 9:20,21 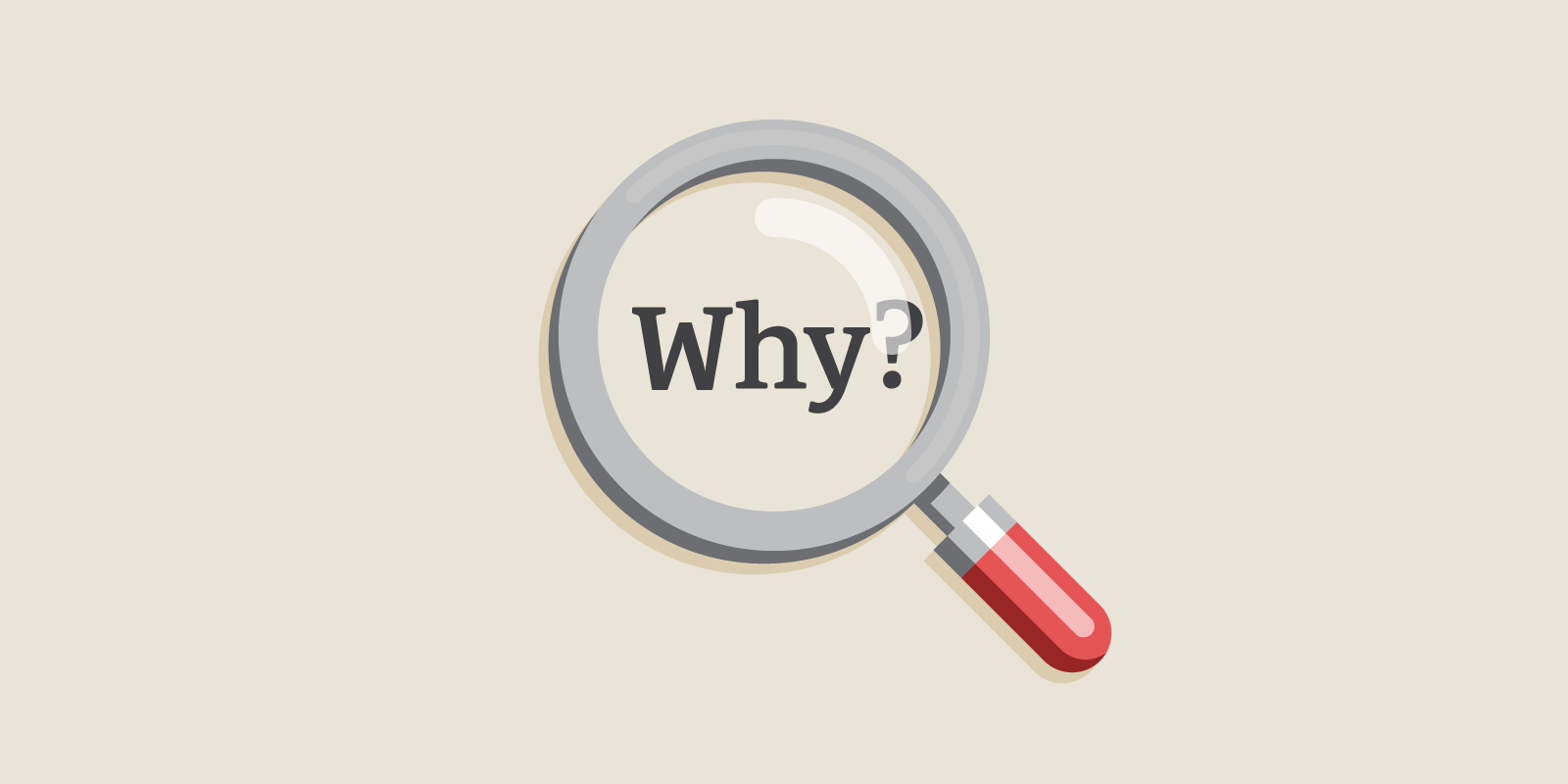 When doubts invade as an unwelcomed prancer;
questions eat at you like a growing cancer.
You don’t understand and long for an answer.
Don’t get caught up on the whys.

For this calamity you had to make room.
Somber clouds on your horizon now loom.
You long for joy, but you wrestle with gloom.
Don’t get caught up on the whys.

You may feel you’re at the end or your rope.
You’re struggling to function, go forward or cope.
There’s a key to not giving up all hope.
Don’t get caught up on the whys.

If you love God, all things work together for good
though you may not see now how they possibly could.
The Lord knows best, be it understood.
Don’t get caught up on the whys.

When despair and depression seem to be pally,
the passageways of your mind you must rally.
Start praising your way out of this lonely valley.
Don’t get caught up on the whys.

Life is not always fair, this is true.
Your tranquil essence can turn suddenly askew,
but you can be a victor. Determine that you
don’t get caught up on the whys.

Proverbs 3:5,6 – “Trust in the LORD with all thine heart; and lean not unto thine own understanding.
In all thy ways acknowledge him, and he shall direct thy paths.”

I Peter 1:6 – “Wherein ye greatly rejoice, though now for a season, if need be, ye are in heaviness through manifold temptations:”

Romans 8:28 -” And we know that all things work together for good to them that love God, to them who are the called according to his purpose.” 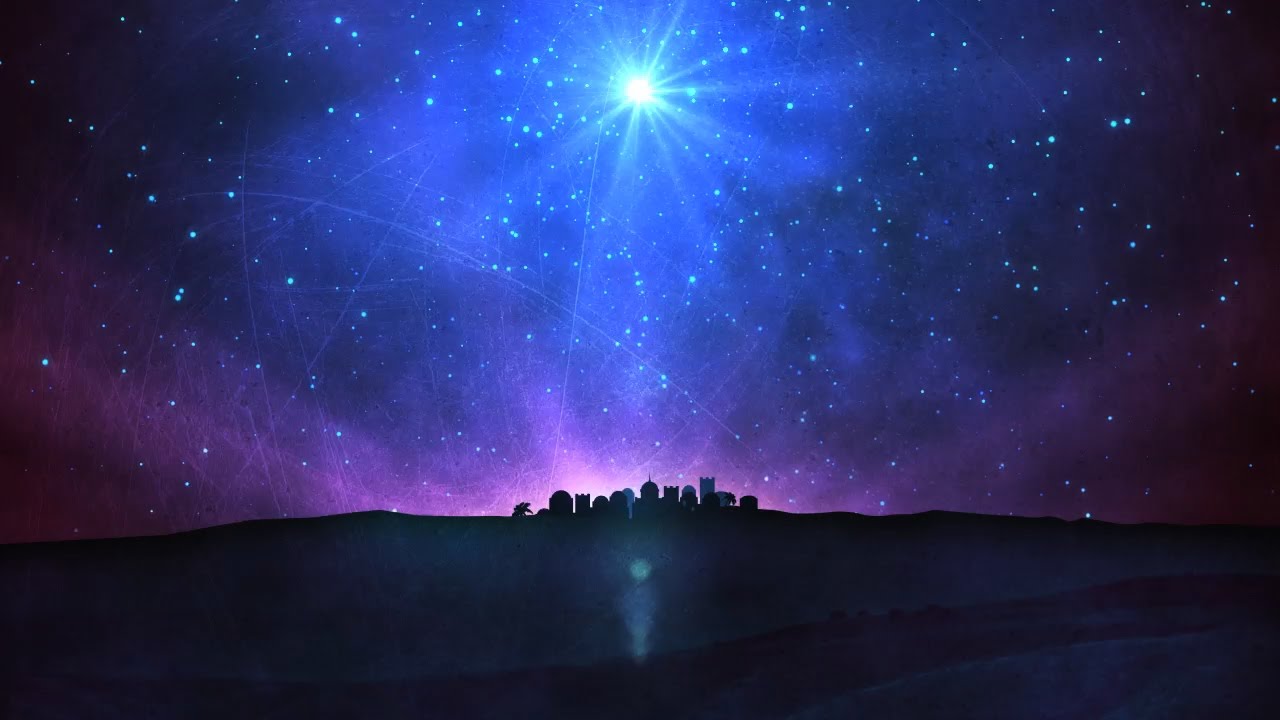 Proud star of Bethlehem by choice divine
bright emanating light to be a sign
to wise men in search of the King of the Jews.
Your brilliant radiance brought them news
as above you fulfilled your twinkling commission,
and led seeking Magi on their holy mission
right to the abode housing young Jesus boy.
Your light hovered o’er dwelling. The wise men felt joy
for now they had come to the exact place
where they worshipped the Christ child face to face,
due to the fact that from you, beams were hurled.
With pride you led men to the Light of the World.

Who Is Waiting On Who

“Go and shew yourselves unto the priests.”

Perhaps these were words they expected the least.

Why didn’t Jesus say , “I pronounce you healed.”?

Could it be there was truth He wanted revealed?

These lepers were cleansed as to the priest they went.

Their obedience preceded the miracle that was sent.

Many times we can feel like we’re waiting on God.

Could He be waiting on you? Don’t think it odd

that faith on our part does require action

to see our prayer answered and have satisfaction.

What is it that God, of you would require?

the thing for which your soul doth hath need?

Exercise your faith by performing the deed.

There is victory ahead, a miracle in the making

if your obedience is the first step you’re taking.

Luke 17:11-14  And it came to pass, as he went to Jerusalem, that he passed through the midst of Samaria and Galilee.

And as he entered into a certain village, there met him ten men that were lepers, which stood afar off:

And they lifted up their voices, and said, Jesus, Master, have mercy on us.

And when he saw them, he said unto them, Go shew yourselves unto the priests. And it came to pass, that, as they went, they were cleansed.

Many consider it worthless as dross,
something that into the trash you should toss.
Let’s take a look from another perspective
and see wherein lies useful beauty, effective.
It can make great bedding for your pet.
Economically, it is your best bet.
When the kids are bored on a rainy day,
you can use it to whip up some papier-mâché.
To soak up those spills that are accidental
you’ll find it to be very instrumental.
Employ it to make stuffed animals, soft toys
that will be a delight to young girls and boys.
To bring some warmth to a crusty, old codger,
pack it in a tube sock to make a draft dodger.
Save it by colors, and tear it apart
to create truly stunning works of art.
Make a new Fuzzy Wuzzy just because
you can fill him with this cost effective fuzz.
In case you’ve not guessed from each given hint,
I speak of the charm of dryer lint.
Before I end my utterance, just let me say
we can also apply this in a spiritual way.
Oddballs, losers, misfits that many would cast aside
are still precious souls for whom Jesus died.
If they will surrender themselves to the Master
He’ll make beauty out of what would have been a disaster.
My life changed by one touch of God’s fingerprint,
and I’m happy to be counted among the Lord’s lint!
10/26/18 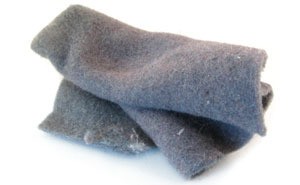 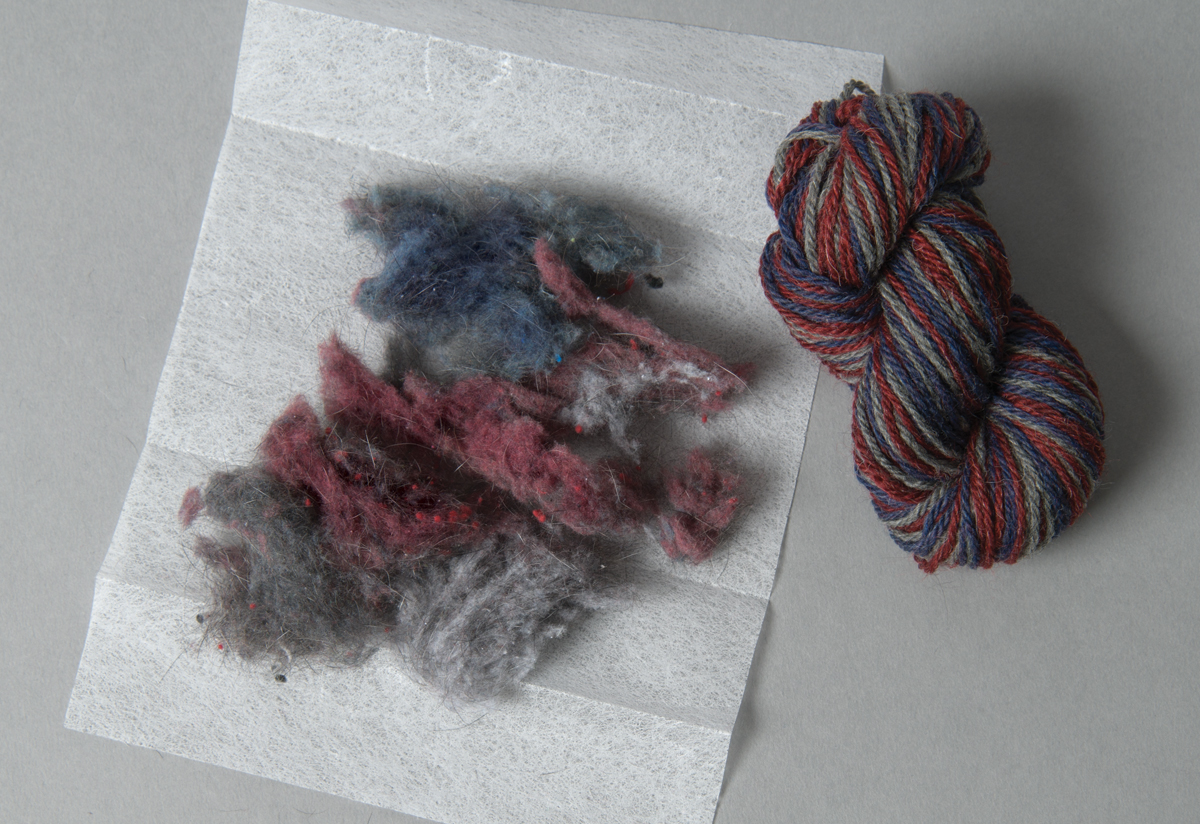 yarn made with dryer lint 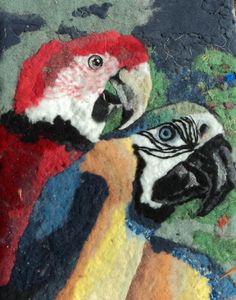 art work made with dryer lint

There bloomed a winter wildflower
because God wanted you to know
limitless, His might and power
in your season of cold and snow.

Testing seemed to zap your strength but
there bloomed a winter wildflower.
God longs for you to see that what
you need can bloom at zero hour.

Spring has come to your grateful heart.
Satan failed to devour.
Where he sought to plant doubtful dart
there bloomed a winter wildflower. 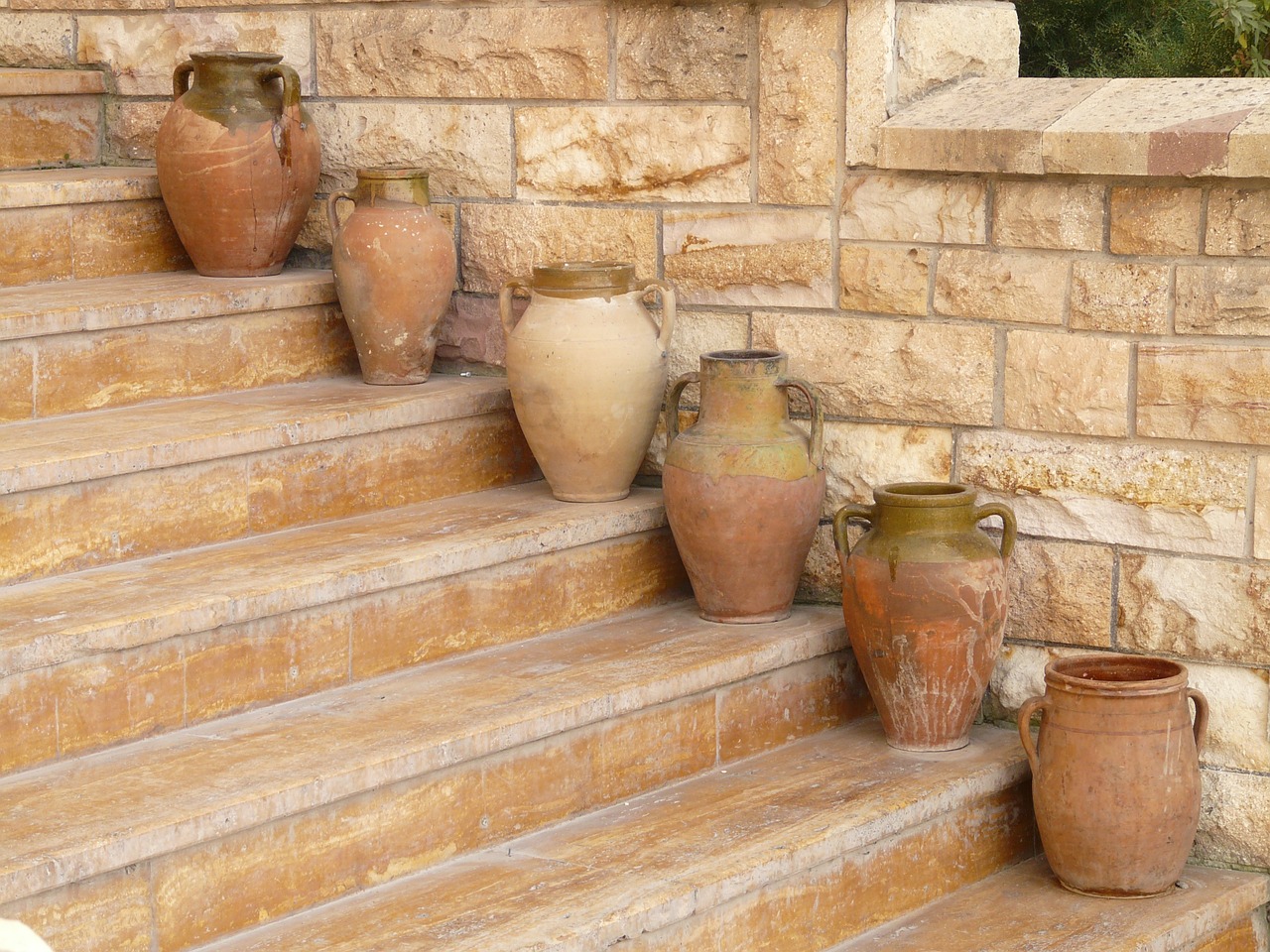 Whatsoever he saith unto you, do it.

These words of Mary to servants were spoken.

Their obedience to Jesus would be the token

of a miracle. They were about to view it.

Jesus told them, the waterpots to fill.

Perhaps this seemed a strange request,

but their compliance would soon be blessed

with water turned to wine. What a thrill!

What is it that the Master asks of you?

Does it by chance to you seem odd?

is always the right thing to do.

if when God speaks to us through His Word

we would become doers of what we’ve heard.

It’s the sure path to victory.

“His mother saith unto the servants, Whatsoever he saith unto you, do it. And there were set there six waterpots of stone, after the manner of the purifying of the Jews, containing two or three firkins apiece. Jesus saith unto them, Fill the waterpots with water. And they filled them up to the brim. And he saith unto them, Draw out now, and bear unto the governor of the feast. And they bare it.  When the ruler of the feast had tasted the water that was made wine, and knew not whence it was: (but the servants which drew the water knew;) the governor of the feast called the bridegroom, And saith unto him, Every man at the beginning doth set forth good wine; and when men have well drunk, then that which is worse: but thou hast kept the good wine until now. This beginning of miracles did Jesus in Cana of Galilee, and manifested forth his glory; and his disciples believed on him.” John 2:5-11

“But be ye doers of the word, and not hearers only, deceiving your own selves.” James 1:22

Miracle rose breaks through the ground

where rigid hardness did abound.

To bloom, it seemed there was no way.

Stubborn hearts can be brought around

and yield to its gentle sway.

Cold souls may be a battle ground,

with intervention, can rebound.

Let not their stiffness cause dismay.

Be it fuel to watch and pray.

Result of faith, it will astound. 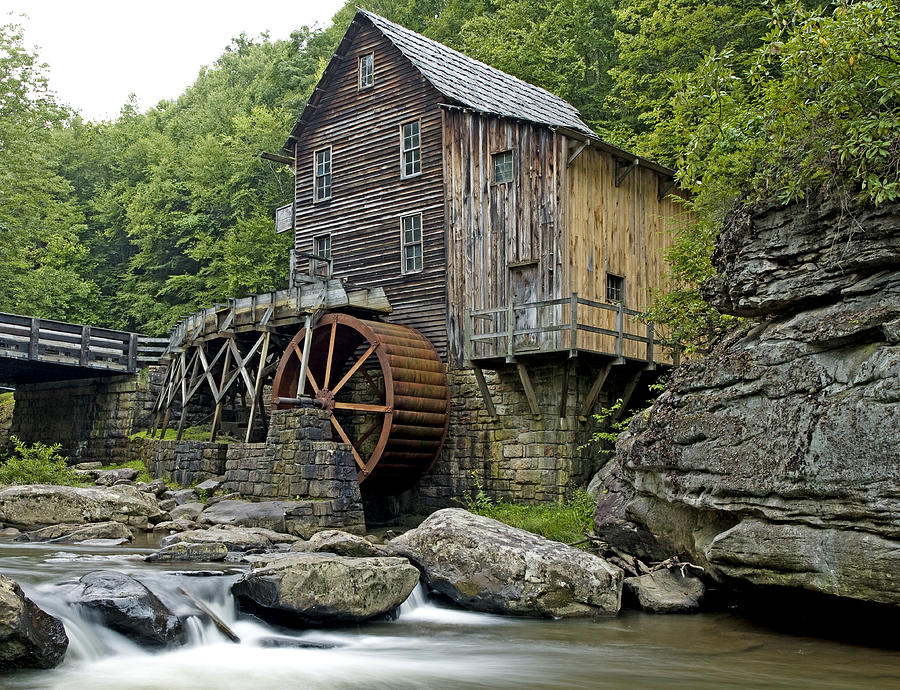 There is a special gristmill, not seen by human eye.
The thing that’s ground within it is not grain.
Many would escape its clutches, and here’s the reason why.
It can be a source of suffering and pain.
When heartache comes our way or great affliction,
woes, losses or perhaps a body  ill,
it may for us, just be a crucifixion
of our selfish, stubborn, defiant human will.
If we, to this character crushing can submit,
allow the thing that God is bringing to pass,
when the process is done, it’s then that we’ll be fit
our life can feed one, two, three, perhaps a mass.
So when circumstances of life seem to pound you down,
you feel that you have had more than your fill,
an abundant ending will surely come around
if you’ll let God do the work on that unseen mill.
5/24/18