Dulcet melody of robin singing
now indicating spring is in the air
blooms in resurrection now are bringing
in gardens many, colorful fanfare.

Renewed fresh life, it’s wonder does now lace
the earth with youthful, strong vitality
God’s faithfulness does put it all in place
blessing to be enjoyed by you and me.

Perhaps in spring, there lies for men a clue
They too, through God can have a birth brand new.
2/25/19

Joh 3:5  “Jesus answered, Verily, verily, I say unto thee, Except a man be born of water and of the Spirit, he cannot enter into the kingdom of God.” John 3:5

Ah, thou lesser lights that rule the night,
how many and manifold are thy purposes!
Let me recount some of thine accomplishments. On many
occasion you have provided a glorious backdrop with your
*******dazzling diamonds*******
for multitudes of young men dropping to their
knees to lovingly propose to the girls of their dreams. Preschool
and kindergarten teachers and students have thrilled to your
red,* green,* blue,* silver* and gold* foil likeness
adorning good
behavior charts. Many countries have used your stunning image to decorate
their flags, and without you, my country would have an
unspangled banner.  Brutal boxers delivering their winning punch
have caused their stunned opponents to see myriads of you.******             Without you, awestruck astronomers would only be able
to gaze at the moon in fixed fascination.
From point* to point,* thou hast provided the shining stuff of which the
constellations are made.  Colloquially speaking, if it weren’t for you, we could
not reach for the stars, have stars in our eyes, be every inch a star or
hitch our wagon to a star.
So many wonderful achievements you’ve made
in your life time, yet one star in its divine directive caused you to dwarf.
Blazing brilliantly in the night sky, that nameless star pointed the way
to the location where was born the most important Figure in history.
Wise men still seek the One who was illuminated by that
lone, lovely light <*>
so many years ago.

The gilded leaves of autumn sigh

and herein lies the reason why

soon, they know, their time to die.

Adorned for a season with colors grand

and yet somehow they understand

death by their Maker has been planned.

But many before have been blown and swirled

with Goodman Gust have danced and twirled

as if not to have a care in the world.

“A leaf I’ll be always” is there perception

crafted by a draft of deception

eternity is a far future conception.

And so they spend their days in ease

living free spirited among the trees

letting the winds blow where they please.

If they’re honest though, they have a hunch

colors will fade, be reduced to a crunch

grim reaper will give the knock out punch.

whose branches towards the Son are slanted,

in soil of God’s Word, so firmly planted.

A tree that lifts her arms to pray

when things are rosy or it’s been a bad day.

A tree that can provide some refreshing shade

for those who in burning trials, may feel waylaid.

A tree that in each and every season

knows for its existence there’s purpose and reason.

but only God can make a Christian a tree.

Inspired by one of my favorite poems, Trees by Joyce Kilmer

Psalm 1:1-6  Blessed is the man that walketh not in the counsel of the ungodly, nor standeth in the way of sinners, nor sitteth in the seat of the scornful.

But his delight is in the law of the LORD; and in his law doth he meditate day and night.

And he shall be like a tree planted by the rivers of water, that bringeth forth his fruit in his season; his leaf also shall not wither; and whatsoever he doeth shall prosper.

The ungodly are not so: but are like the chaff which the wind driveth away.

Therefore the ungodly shall not stand in the judgment, nor sinners in the congregation of the righteous.

Dear autumn time brings splendid holiday
in lovely shades of ginger and saffron.
Bright leaves announce Thanksgiving’s on its way.
Our crimson blessings we reflect upon.
With pies of pumpkin and amber chiffon,
cinnamon sentiments filling the air;
sweet loved ones and friends have gathered so near.

There’s frolic, feasting till the evening tide.
Of food and fellowship we’ve had our fill.
The umber sky, sun’s fire does now hide.
Our hearts are filled with gladness and good will
which does not dissipate with autumn’s chill.
And though Thanksgiving Day has come and gone,
the many colored memories live on.

I’ve watched the societal winds of change
blowing all my life.
The transformations they’ve brought about,
to say the least, are rife.

I know of many who once served God
back in the days of old,
but contrary winds blew on their souls
causing that love to grow cold.

In the days of my childhood
marriage was a sustaining force.
Headstrong breezes blasted the family;
made it popular to get a divorce.

I remember when children were cherished by parents.
They were nurtured, loved and protected.
With the adverse winds of promiscuity
we’ve a crop of kids abused and neglected.

God was once a part of public education.
Against Him there was no rule,
until a liberal gale stirred up a storm
and blew Him right out of school.

Kids grew up reading in my day.
Now with books, they’re less and less seen.
With the advent of technological typhoons,
they’re usually glued to a screen.

So many wayward winds are blowing these days.
Much virtue and character we’ve lost.
We need a revival of the wind
that blew on the day of Pentecost.

The wind of God blew on that inaugural day.
They were filled with God’s Holy Spirit.
The gospel that truly sets men free,
with boldness, they did declare it.

Although some did not like this wind
and persecution did abound,
through the power of God that changed them,
they turned their world upside down.

Oh, for that wind to blow today.
What blessing it does impart.
It brings the change that every man needs,
and it starts within the heart!

Acts 2:1-4  And when the day of Pentecost was fully come, they were all with one accord in one place.
And suddenly there came a sound from heaven as of a rushing mighty wind, and it filled all the house where they were sitting.
And there appeared unto them cloven tongues like as of fire, and it sat upon each of them.
And they were all filled with the Holy Ghost, and began to speak with other tongues, as the Spirit gave them utterance.

Act 17:1-6  Now when they had passed through Amphipolis and Apollonia, they came to Thessalonica, where was a synagogue of the Jews:
And Paul, as his manner was, went in unto them, and three sabbath days reasoned with them out of the scriptures,
Opening and alleging, that Christ must needs have suffered, and risen again from the dead; and that this Jesus, whom I preach unto you, is Christ.
And some of them believed, and consorted with Paul and Silas; and of the devout Greeks a great multitude, and of the chief women not a few.
But the Jews which believed not, moved with envy, took unto them certain lewd fellows of the baser sort, and gathered a company, and set all the city on an uproar, and assaulted the house of Jason, and sought to bring them out to the people.
And when they found them not, they drew Jason and certain brethren unto the rulers of the city, crying, These that have turned the world upside down are come hither also;

Just a tiny, crawling creature is she.
You would think her resources would be scant,
but what an example of industry.
I refer to the insect known as the ant.

With no overseer, ruler or guide,
she is quite diligent to do her work.
Perhaps it’s just how she’s wired inside.
Has a disposition to never shirk.

In hot summer time she provides her meat;
at harvest faithfully gathers her food.
Such a strong work ethic you cannot beat,
wonderful eager beaver attitude.

To avoid in life a lazy demise
Go to the ant, sluggard, and be thou wise!

Proverbs 6:6-8  Go to the ant, thou sluggard; consider her ways, and be wise:
Which having no guide, overseer, or ruler,
Provideth her meat in the summer, and gathereth her food in the harvest.

Refreshing current, first time upon me broke
when God’s Spirit indwelt me, in tongues I spoke.
I’ve got the river!

Sometimes it is a peaceful ride
with still pure water on the inside.
I’ve got the river!

On occasion it bubbles up merrily
and truly I know, verily, verily,
I’ve got the river!

Some days the waters wind and turn.
Perhaps there’s a lesson for me to learn.
I’ve got the river!

Other times it’s wild and exciting
Those spiritual rapids, I am riding.
I’ve got the river!

When I yield myself to its full control
the waves and billows sweep over my soul.
I’ve got the river!

This life giving water is for all to receive
if according to the Scriptures, you will believe.
You can have the river!

John 7:38-39 He that believeth on me, as the scripture hath said, out of his belly shall flow rivers of living water.
(But this spake he of the Spirit, which they that believe on him should receive: for the Holy Ghost was not yet given; because that Jesus was not yet glorified.)

John 16:13 Howbeit when he, the Spirit of truth, is come, he will guide you into all truth: for he shall not speak of himself; but whatsoever he shall hear, that shall he speak: and he will shew you things to come.

Act 2:1-4 And when the day of Pentecost was fully come, they were all with one accord in one place.
And suddenly there came a sound from heaven as of a rushing mighty wind, and it filled all the house where they were sitting.
And there appeared unto them cloven tongues like as of fire, and it sat upon each of them.
And they were all filled with the Holy Ghost, and began to speak with other tongues, as the Spirit gave them utterance.

Act 10:44-48 While Peter yet spake these words, the Holy Ghost fell on all them which heard the word.
And they of the circumcision which believed were astonished, as many as came with Peter, because that on the Gentiles also was poured out the gift of the Holy Ghost.
For they heard them speak with tongues, and magnify God. Then answered Peter,
Can any man forbid water, that these should not be baptized, which have received the Holy Ghost as well as we?
And he commanded them to be baptized in the name of the Lord. Then prayed they him to tarry certain days.

Morning walks are often a
time to experience the beauty of
natural wonders. If one listens
closely, sounds of concealed
creatures may be heard.

The nimble lizards hidden within the bushes scurry as I pass.

Plant life can be seen even
in some of the most populated
cities. A wide variety
of flowers add a sense of
grace and tranquility to
day time jaunts.

The well tuned ear can
pick up the cheerful chirping chatter
of the
fowls of the air. Assorted
birds sometimes dot the sky
on their aviation adventures.

Bold Mr. Scrubjay begins his flight of fancy, bolts into the sky. 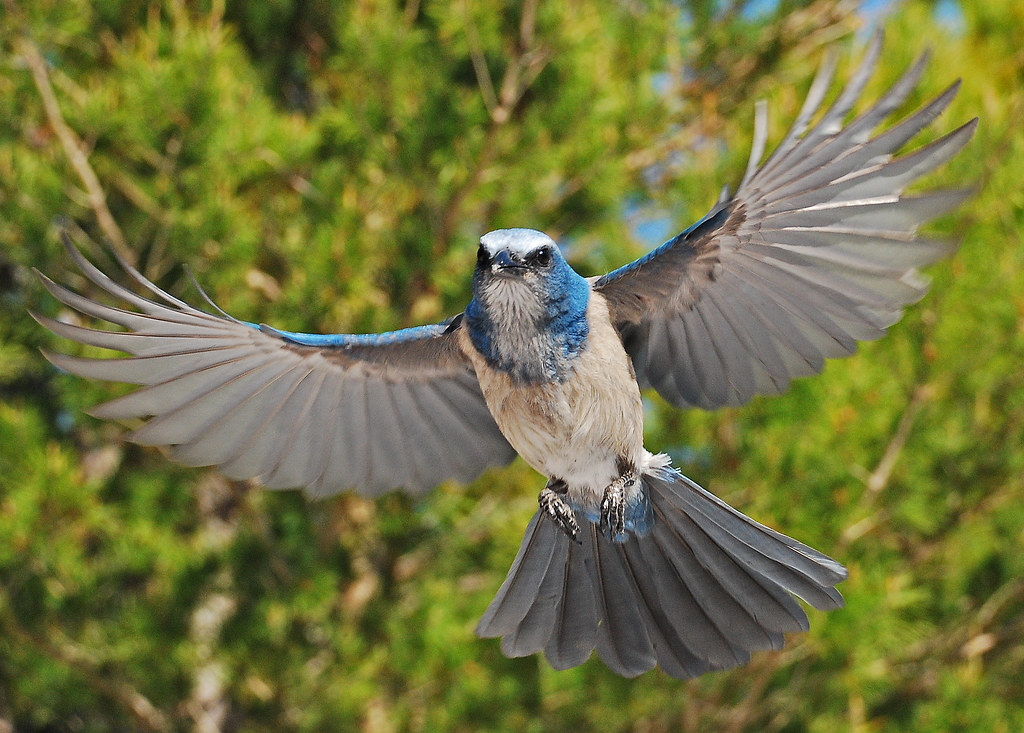 The sights,
the sounds,
and even the feel
of the wind present
evidence that is almost
overwhelming.
Nature
lifts her voice
and shouts against
the fallacy that the
earth’s intricacies are
a cosmic accident.

The verdict is in. He’s guilty of existing, the great Creator.