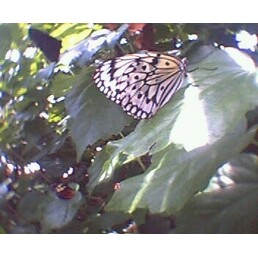 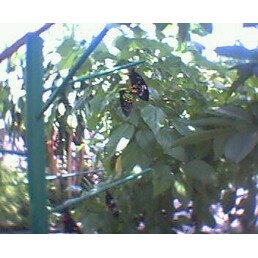 Yesterday, I took these butterfly pictures with my cell phone on our visit to Six Flags Discovery Kingdom(formerly Marine World).  As we were standing in line to go on the white water rapids ride(it’s a lot more mild than it sounds), my husband asked me what my favorite attraction had been so far that day.  I said, “Well, the African acrobats were interesting, and this is probably going to sound kind of dumb, but I really enjoyed the butterflies.”  He said that was his favorite thing too and that we are really showing our age through our response.  Now mind you, Discovery Kingdom is loaded with thrilling rides.  There are lots of roller coasters such as Medusa, Kong, Roar, V-2 and Boomerang.  There is a bird show, whale show, dolphin show, wild animal show and several other animal exhibits.  We have been to Discovery Kingdom/Marine World many times, but I have never been so impressed before with the butterflies.  I just had a blast walking around in the exhibit and trying to catch the beauty of the butterflies on my cell phone.  One type of butterfly I saw was a mothy brown color on the outside, when its’ wings were folded up, but on the inside, the wings were a brilliant blue color.  I tried to get a picture of it, but it just wouldn’t be still long enough.

As I was walking around and trying for Kodak moments with these butterflies, my mind went back to a tape I used to play for the kids when they were little called Bullfrogs and Butterflies.  The title track talks about the transformation that takes place when a tadpole becomes a frog and a caterpillar becomes a butterfly.  I learned years ago in school that that change is called a metamorphosis.  It’s fascinating to think that a tadpole which at one time was limited to only swimming around in water, becomes a creature that can explore the land, and a caterpillar, which spends its’ days crawling on the earth, becomes an insect which can fly.  It’s neat how so many thing in nature can illustrate spiritual principles.  I’m thankful there came a day in my life when I was “born again.”  Old things passed away and all things became new!(See 2Corinthians 5:17, John 3:5) When I was water baptized and filled with God’s Sprit, a great transformation took place in my mind and life.  It was like looking at the world through brand new eyes.  It’s been an incredible journey, and through the new nature that God gave me, I’ve been able to experience things in God’s Spirit that would not have been possible without this miraculous metamorphosis.  How wonderful it is to have a God that can cleanse us, change us and make us brand new!

Another nice thing about this trip to Discovery Kingdom is now that the kids are older, and my daughter has a cell phone, we were able to let Jen, Paul and his friend Reese wander around without us and do the things they like to do at the park.  Thus, a good time was had by all, and we left the park later that evening tired, but relaxed and feeling like we had gotten our money’s worth.  🙂

There were mosaic looking animal sculptures all through the park.  I thought this one of an elephant was cool.

I don’t know how they are going to do it, but come Friday morning about 9 a.m. these insects called butterflies are going to be inside Jennifer’s stomach.  I really can’t explain how they do it, but I know that they do get inside your insides, because they have been doing it to me for years.  Jen’s senior finals for Bible quizzing are beginning this day, and I know she will be a little nervous.  The butterflies always come to me when I’m nervous too.  It’s really an incredible phenomenon.  However, I know that Jen will do just fine.

On the other hand, our going away the weekend for senior finals will mean that once again, Misty will have to do time in her “poochie penitentiary.”  (also known as the slammer) She’ll see the suitcases come Thursday, and once again, she’ll get that dejected look in her eyes of a dog that’s about to face solitary confinement.  If only she knew that we plan to make it up to her at the end of July by taking her with us when we go to campmeeting.  But alas, she lives only in the here and now and cannot anticipate the future. (except for her next meal, of course) If I could, I would assure Misty that just as Jen’s butterflies will eventually flee, so her weekend lockdown is only temporary.  Bible quizzing season is almost over!